When lovesick youth proclaim things like ‘I will climb any mountain for you’, they have no idea what they are saying. For Titus Kakembo, Mount Elgon looked like an attractive challenge, until he started the actual climb. Climbing Mount Elgon is one adventure that will creat the most memorable experiences for anyone. 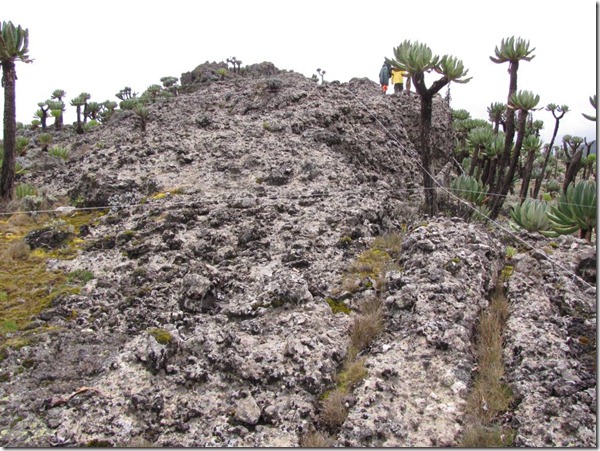 As we set out to climb Mount Elgon, we were treated to the semierotic Kadodi dance as jubilant residents performed the ritual jog and dance to the beat. Kadodi is a traditional dance to celebrate the Bugisu rite of imbalu (circumcision), the initiation of boys into manhood.
Friends, relatives and in-laws to be of the circumcised boys are in carnival mood. They tell tales of the brave candidates rubbing hot pepper or salt in the raw wound. This is done by initiates, just to impress the opposite sex or be elevated a rung above their peers.

Imbalu country
On a Friday morning, I joined some members of the revived Uganda Mountain Climbers Club on a mission to scale the landslide-prone volcanic ranges in eastern Uganda. After a bumpy ride to the Uganda Wildlife Authority (UWA) offi ce in
Budadiri, we were ambushed by the imbalu group gyrating to the kadodi beat as if they were possessed.
The band was led by an ochrepainted lad, whose body glistened with beads of sweat under the noon sunshine. He was decorously dressed in intricate strings of beads. Motorists had to pay sh2,000 or more, for the crowd to give way like the Red Sea when the Biblical Moses slapped it with his walking stick.
Besides that, Budadiri is visibly suffering from retarded development. What used to be a tourist hotspot, Wagaigai Hotel, is overgrown with bush. It was named after the highest peak of Mount Elgon. Once plush and comfy, the hotel has since closed down. Today, tourists ride from Mbale on boda boda or rickety mini buses, which are in the habit of breaking down.
The main mosque in Budadiri struggles to stay on its feet as the bricks fall apart. All the mountain climbers can get before embarking on the adventure are chapati for sh300, boiled maize for sh200-sh500 and soda for sh1,000. At Muzafari’s nameless eating place, a plate of katogo is sh2,500 and tea served in a hot steel mug costs sh800.
Residents complain about the banana wilt disease that has destroyed their banana plantations, while coffee is no longer profitable as was the case in the 1960s. Elders prefer the coffee smuggling days of the 1970- 1980s, when they exchanged their produce with essential commodities. They also speak of the menacing landslides costing their lives and property.

In the wild
“Seeing us armed and dressed in army uniforms should not scare anybody,” the assistant UWA warden, Steven Nyandra, interrupts my train of thought. I was worried about my maiden Mount Elgon expedition. “It is strictly to ensure your safety. In our paths are wild animals ranging from sitatungas, tree hyrax, duiker, elephants, bush pigs, leopards and many others that need scaring away as we trespass their territory.”
Besides the wild animals on this trail, there is plenty of birdlife, including the handsome Ross’ Turaco, hornbills, and the Crowned Eagle. We signed our individual credentials in a UWA book and were fl agged off. Nyandra steered clear of mentioning the fact that, due to the Al Shabaab threats to Kenya, Uganda’s security forces beefed up security at popular tourist attractions.

Strong porters
We were joined by spindly-limbed, but energetic porters. They know the mountain so well, they could climb it with their eyes closed. The checklist comprises of food, tents, cameras and luggage for climbers. For a wage of sh50,000 a trip, the porters trek up and down at a fast pace, like a cursor criss-crosses a computer screen as it is controlled by the mouse.
Unlike their sophisticated clients, the porters need no mountain boots, insect repellents or climbing gear. Excitement is written all over their faces as they shuffle about to share the luggage. I overheard careless whispers about “weak urban dwellers” who take several days to do what they are capable of accomplishing in five hours. “I hope nobody has any sickness like a cold, headache, malaria or is under medication,” cautioned Nyandra as we prepared to set off at Bumasika village. He then announced that the climb would take two to five days.
He was confident that two days would do, considering the energy displayed by the members in our group — CharlieLangan, UBC’s Dennis Sigowa, Carolyn Mcpherson, Andy Wunder and Jenny Farmer, beside myself. The cook, Zeveriyo Gibaba, armed with tomatoes, onions, spaghetti, tinned beans, biscuits and maize fl our, assured us that he would take care of us.
“Just take along a huge appetite because you need tones of energy to get up there,” he said. He added that he has been cooking for mountain climbers for four years and was born here, so we didn’t have to worry. I wondered whether I had heard the mention of malewa, a local delicacy made from bamboo, nyamachoma and cans of tinned beer or was it my wild imagination? Earlier on, at the planning stage, there was mention of beef. But it was cancelled as one of the climbers was allergic to meat.

The higher you go…
On our way up, we met locals going down with loads of potatoes, malewa and firewood. Either way, movement was in single fi le, like soldiers on patrol. Within three hours, we were audibly gasping for breath. The higher we went, the more conversation dropped from the regular banter to monologues.
My breath became laboured; the knees were aching like I had walked from Moroto to the Martyr’s shrine in Namugongo. This was at a height of 2000m above sea level. When I answered to nature’s call, my urine was mysteriously yellow. I developed a pounding headache. The leather mountain boots were feeling heavy and making me move in moonwalk style.
I felt so thirsty and spent. Nyandra noted that it was a red flag. He told me that I did not have to walk at the same pace as the others, but at my own pace. However, I still found breathing harder in spite of having reduced my pace. We took another break and then I was told to take the lead so as not to be discouraged by the others’ speed. Nyandra noticed I was struggling. He told me not to push my limits because it would only get worse as we went higher.

Giving up
After two breaks, I painfully gave up the climb as the rest continued up. I sat down on a stone and Daniel Owiny, one ranger, stayed with me to lead me back down. I had really wanted to reach Wagagai and the cliff described as ‘the wall of death’, but my body was screaming for relief. I knew then the meaning of ‘the spirit is willing, but the fl esh is weak’. To my surprise, descending was no easy task either. We met a thread of safari ants crossing the paths.
They were ready to bite any flesh. Snuggling through my corduroy trouser, one was destined upstairs, another
dug its teeth in my arm through the overcoat and roamed my rucksack. I contemplated stripping myself naked for relief — after all it was just me and Owiny.
Later, Owiny, who was behind me, lost his footing and landed with a thud on his backside. How he controlled his fall without letting the AK47 go puzzled me. I never investigated whether one safari ant had not ventured up his camouflaged army trousers and caused the upset.

Broken bridge
At Bumasifwa trading centre, we parted ways. The wooden bridge on River Machapa that we had used some hours earlier was partly broken and cars could not cross over. A lorry loaded with maize had done the damage to most of the wooden slats. Owiny got me a boda boda that could somehow balance on what was left of the bridge to cross the river. I said a prayer for God to save me from a landslide as I balanced on the motor bike.
By now, my breathing was normal, the headache had disappeared without taking any pain killer and the dizziness was no more! The boda boda left me sh5,000 poorer, for a 15-minute ride, down a slope, in free gear! “I hear before we (Bagisu) settled here, there was a tribe called Elgonyi, who used to occupy this land.
They migrated, but the name was corrupted into what we now call Mount Elgon, ” the boda boda rider narrated. I went to my lodge in Mbale town and the next day I met Denis Sigowa and Peter who had also given up the climb and beaten a hasty retreat back to sanity. They were staggering as if they had been wrestling an elephant.
We had a sumptuous lunch at a boarding house called Last Chance. I was updated on what I missed when I dropped out before reaching Mudde Camp for a night.

What I missed in climbing Mount Elgon

Apparently, the team had gone on in silence, only listening to each other panting for breath. Drama reportedly unfolded when they reached the precarious escarpment called the Wall of Death. That night, when they slept, one of the climbers screamed his head off as he dreamt he had missed a step and was falling down a bottomless pit.
Contrary to expectations, by the time they got to the rest place, Sigowa failed to eat, yet he was very hungry. As usual, the swift porters had already made a fi re and prepared meals — porridge, tea and coffee. The bath water was already steaming hot. There were lots of biscuits and juice.The members of the Mountain
Climbing Club wanted to sample the malewa, but the guides could not let them do that before reaching the peak. That was the end for Sigowa who begun staggering back the next day.
The climbers helped residents in the mountain slopes in roasting a dough mix, which is a raw material for brewing beer. Charlie Langan, a tourist from the UK, went right up to the peak. He says on reaching there, after a 45-minute rest, the first thunder rumbled through the expansive crater.
They quickly started their way down for fear of lightning striking them up there. A minute later, it started raining stones in their faces. The enormous thunder took them off their feet. It happened in a fl ash. They were left completely soaked. The thunder seemed to be below and above. “The guide showed me the Kenya side of Mount Elgon,” Langan recounted. “I remain blown away by what I saw at the tip of Mount Elgon.
There are the Wagagai hot springs, the caldera, Mude Caves and the kind of vegetation you will not see elsewhere in Uganda.” He lamented about the wild life that has been depleted by poachers “We never saw a single mammal mentioned in the writings of the Mountain Climbing Club members of the 1950s. But the bamboo forest and the blue sky is like a piece of canvas. And Sipi Falls on the return route is spectacular,” he observed.
According to him, Mount Elgon is easy and cheap to climb. It needs no special skills. The altitude sickness is mild compared to Mount Kilimanjaro or Mount Kenya. It can be climbed at any time of the year. Hikers have to supply their own tents because there are no huts. Just bring along enough warm clothing.