Golden monkey tracking or Trekking to see the golden monkeys is another highlight of Volcanoes National Park. The Golden Monkey (Cercopithecus Mitis Kandti) is a local subspecies of the widespread Sykes Monkey, also known as the “Blue Monkey” and is endemic to the high altitude forests of the Volcanoes National Park area. The Golden monkeys are rare species is listed as endangered. The monkeys are playful and inquisitive and often spend their time leaping from bamboo branches or frolicking on the forest floor towards the base of the volcanoes and have overcome their initial shyness to accept their daily visit by researchers and tourists. 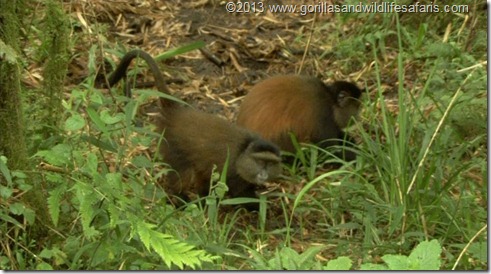 There are two habituated groups of Golden Monkey, one group comprises around 80 – 100 members and has its home at the foot of Mt Sabyinyo.

In the same way you track mountain gorillas so will your track the golden monkeys. Treks to see the Golden Monkeys take place in the mornings and visitors are permitted to stay for 1 hour with the monkeys. Departure for the Golden Monkey trek is from the Park’s Kinigi Headquarters at 07:00am. The number of visitors is not limited and the fee for a Golden Monkey permit is currently USD$100 per person per trek. Permits can either be arranged in advance or booked at the park headquarters on the morning of the trek. Porters can be hired at the entry point of the park.

Golden Monkeys are very sprightly creatures, and leap from tree to tree which is really entertaining, if a little difficult to photograph! We recommend setting your camera to a fast shutter-speed to allow for low light in the dense undergrowth and to better your chances of capturing the golden monkeys on film!

This is a great way to spend an extra day in the Volcanoes National Park and if you’re interested in wildlife, this is a rare and delightful experience not to be missed!