Gorillas and Wildlife Safaris Uganda has won the prestigious Certificate of Excellence from TripAdvisor, which honours businesses that consistently earn top ratings from TripAdvisor travellers. 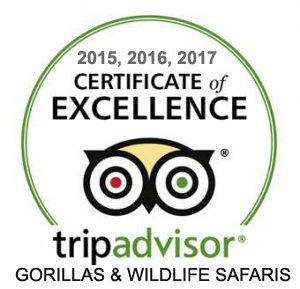 Gorillas and Wildlife winner of 2015,2016,2017 certificate of excellence trip advisor

With the rating of 5, Gorillas and Wildlife Safaris has earned a place among the very best. The award is given to only the most exceptional performers in the TripAdvisor global business community. It is a significant achievement deserving of recognition from both travellers and staff. In Uganda, the company is the the only tour operator to win the award in 2015.

TripAdvisor is the world’s largest travel site that recognizes the power of travellers’ feedback.’ We are proud to recognise Gorillas and Wildlife Safaris for earning exceptional traveller rating over the past year,’ confirmed Christine Petersen, the President Trip Advisor for Business. Ivan Wassaaka, the MD of Gorillas and Wildlife Safaris says that this certificate is a testimony to the reliably high standards in the company. “We strive to offer our customers a memorable experience, and this accolade is evidence that our hard work is translating into positive reviews on TripAdvisor.”

Also Alison Coups, Vice President of Marketing for TripAdvisor for Business confirms this. “The Certificate of Excellence award provides top performing establishments around the world the recognition they deserve, based on feedback from those who matter most – their customers.”

We would like to say a BIG thank you to all our corporate and individual clients as well as companies that have been supporting Gorillas and Wildlife Safaris both in Uganda and Rwanda!

Interested in taking your holiday in Uganda and Rwanda? Why not contact one of our sales team now!