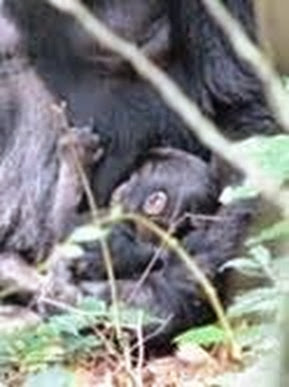 It was one of those very best moments everyone and every family would cherish! A NEW BORN JOINING FAMILY!

Both the mother and the baby, (and silverback dad?) are visibly healthy. 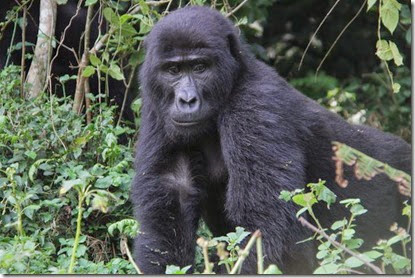 A recently released report by the Uganda Minister for Tourism, Wildlife, and Antiquities and the Uganda Wildlife Authority (2012), the new census reveals a minimum population of 400 gorillas, up from 302 animals in 2006. The census was conducted by the Uganda Wildlife Authority, the Institut Congolais pour la Conservation de la Nature (ICCN) from the Democratic Republic of Congo and the Rwanda Development Board (RDB). The increase can be attributed in part to improved methodology, but also reflects real population growth.

The rise in mountain gorilla populations also indicates the success of a continued collaboration between the Uganda Wildlife Authority with the Institut Congolais pour la Conservation de la Nature (ICCN) in the Democratic Republic of Congo and the Rwanda Development Board (RDB); the Virunga Mountains lie on the borders of three countries, requiring the participation of agencies from Uganda, Democratic Republic of Congo, and Rwanda for effective monitoring and enforcement. Bwindi, however, is located in Uganda, but in the spirit of regional collaboration, the ICCN and RDB sent support teams for the 2011 Bwindi census effort.

Although far fewer in number than their western relatives, mountain gorillas have had a profound effect on both the public and the naturalists who have encountered them. While collecting specimens in Africa for the American Museum of Natural History in the early 20th Century, U.S. explorer Carl Akeley became concerned about the future of the mountain gorilla, helping to establish Africa’s first national park—now Virunga National Park—in 1925 to protect the gorillas.

In the late 1950s, WCS field biologist Dr. George Schaller conducted the first ecological study of mountain gorillas, estimating the total population at that time to be 450 individuals. The Virunga Volcano gorillas were made world-famous by Dr. Dian Fossey’s long-term gorilla study in the 1970s and 80s, a period during which the gorilla population declined dramatically as a result of poaching and habitat loss. In 1979, WCS conservationists Drs. Bill Weber and Amy Vedder helped establish the Mountain Gorilla Project—forerunner of the International Gorilla Conservation Programme (IGCP) —that combined pioneering ecotourism and education programs, with a more traditional anti-poaching effort.

WCS continues to protect mountain gorillas through applied research on key conservation challenges, and by providing support for the national protected area authorities and the Institute of Tropical Forest Conservation (ITFC) in Uganda.