How tough is the Rwanda gorilla trek- Which is the toughest mountain gorilla group to track in Rwanda, which gorilla group is the most popular to track, easiest gorilla family to track, how many hours does the gorilla tracking take in Rwanda? Susa, Kwitonda, Sabinyo, Umahoro?

How difficult is Gorilla Trekking? How fit must I be to track Mountain Gorillas in Uganda or Rwanda?

You must be able and willing to hike in rough terrain and in any weather to see Mountain Gorillas in the wild. However, many older people who don’t think of themselves as hikers or adventurers can successfully visit the gorillas. Personal assistants can be hired to carry your daypack and assist you in difficult areas. The local guides will work to make it as easy as possible for you to track and photograph the Mountain Gorillas. We have had numerous clients in their 70’s succeed in reaching their target Mountain Gorilla groups. But many people return very exhausted, muddy and sore if they are not used to vigorous hiking. Altitude sickness is not usually a problem, nor are insects. You will want a pair of gloves and clothing that protects your arms and legs from thorns and nettles. Good balance is helpful in Gorilla trekking as trails may be slippery. 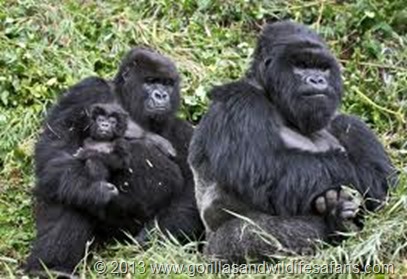 This is one of the most frequently asked questions about gorilla tracking in Rwanda. And it is also perhaps the most difficult to answer. So many variables are involved, and if they all conspire against you, you could be in for a genuinely exhausting outing (indeed on rare occasions, the guides have had to carry tourists down). On the other hand, if everything falls your favour, the excursion will be little more demanding than the proverbial stroll in the park.
The trek to see the gorillas has two distinct phases. The first is the hike from the closest car park to the forest and national park boundary, which usually takes 30-60 minutes depending on the speed of the party and the group they are visiting. The second is trek into the forest in search of the gorillas, which will usually have been located by the advance trackers by the time reach the forest edge.
The first part of the trek is predictable, and it is usually quite flat and undemanding unless you are going to the Susa (Susa-A), which involves a longer and steeper ascent. The second part is more difficult to predict, as it will depend on the exact location of the gorillas on the day, and on the steepness of the terrain en route. Other factors in determining how tough it will be include the density of the vegetation (bending, crawling through the jungle can be tiring especially if you have to dodge vicious nettles) and whether it has rained recently, in which case everything will be muddier and quite slippery underfoot.

At risk of stating the obvious, age and fitness levels are key factors in how difficult the hike will feel. Susa Group aside, moderately fit people under the age of 40 seldom feel any significant strain, but a high proportion of trackers are in their 50s or 60s, in which case the hike might be something tougher. As one trekker has previously commented in the Bradt Guide (Rwanda): ‘We think you underestimate how strenuous the gorilla trip is. We are both 61 but fit and well, bicycle to work each day , and still we had to take regular breaks due to problems with breathing’. That said, while many older travellers do find the track quite demanding, it is very unusual that they are so daunted as to turn back.
An important factor in how difficult the hike will be is which group you are allocated. As a rule, the hike to the Susa Group is the most demanding (but also most rewarding, with more than 40 gorillas on show), while the Sabinyo Group is the most reliably straightforward to reach. The hikes to Kwitonda, Hirwa and Group Thirteen are also usually quite undemanding, whereas the hikes to Amahoro Umubano Groups tend to be more difficult, but not as tough as the Susa Group.
Unfortunately, these things aren’t set in stone, and any group might be unusually demanding (or easy) to reach on a bad day. Furthermore, nobody can guarantee which group you will be allocated in advance. However the guides at Kinigi do make a conscious attempt to match individuals to the most suitable group, especially if they are asked to. Generally the party for the Susa (Susa-A) consists of the lean-looking under-30s, while the opposite holds true for Sabinyo party.
Two further factors are uneven underfoot conditions and high altitude. Most visitors to Africa live in towns and cities where roads and sidewalks are paved, and parks are serviced by neatly footpaths, so they are unused to walking on the more irregular and seasonally slippery surfaces typical of the ascent paths and forest floor. It will help enormously in this regard to wear strong waterproof shoes or hiking boots with a good tread and solid ankle support. Furthermore, if you think you might struggle in these conditions, there is a lot to be said for avoiding the rainy seasons, in particular March-May, when conditions can be dauntingly muddy.
Don’t underestimate the tiring effect of altitude. The trekking takes place at elevations of 2.500-3,000m above sea level, not high enough for altitude sickness to be a concern but sufficient to knock the breath out of anybody – no matter how fit – who has just flown in from a low altitude. For this reason, visitors who are spending a while in Rwanda might think seriously about leaving their gorilla tracking until they’ve been in the country a week or so, and are better acclimatised. Most of Rwanda lies above 1,500m, and much of the country is higher – a couple of days at Nyungwe, which lies above 2,000m, would be good preparation for the Virungas. Likewise if you are coming from elsewhere in Africa, try to plan your itinerary so that you spend your pre-Rwanda days at medium to high altitude: for example, were you flying in from Kenya, a few days in Nairobi (2,300m) or even the Maasai Mara (1,600m) would be far better preparation than time at the coast.
Guides will generally offer you a walking stick at the start of the hike, and, even if you normally shun such props, it is worth taking up the offer to help support you on those slippery mountain paths. If you have luggage, hire a porter too. Once on the trail, take it easy, and don’t be afraid to ask to stop for a few minutes whenever you feel tired. Drink plenty of water and carry some quick calories – biscuits and chocolate can both be bought at supermarkets in Ruhengeri. The good news is that most people who track gorillas find the hike to be far less demanding than they expect, and 99% of cases, whatever exhaustion you might feel on the way up will vanish with the adrenalin charge that follows the first sighting of the silverback gorilla! 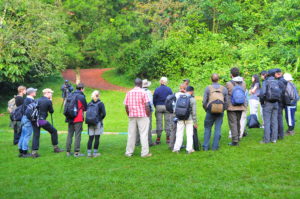