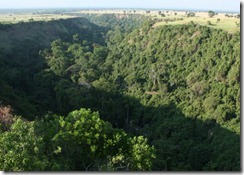 The Kyambura Gorge in Queen Elizabeth National Park is one of several places in Uganda where tourists can see chimpanzees in the wild.
Kyambura Game Reserve, 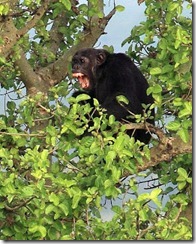 also known as Kyambura Gorge, is one of the most popular tourist draw of  Queen Elizabeth National Park (QENP) in Uganda. It is home to a variety of wildlife, including the only primates in the Queen Elizabeth National Park. The area is an important water source for many animals and is surrounded by savanna, but is generally noted for its high concentration of primate life located in the gorge.
For what it’s worth (at $50 for a chimpanzee tracking), I had an amazing experience with the chimps in Kyambura Gorge. They came down from the trees really close to us. It was the real surprise of my trip as I didn’t have high expectations and I actually enjoyed it at least as much as the gorilla tracking, and at a fraction of the price. I think I was particularly lucky but it just goes to show that with wildlife there are no guarantees.
Kyambura Gorge has always been a bit of a gamble. They reckon it’s a 50-50 proposition for seeing the chimps there.
Trekking the chimps in Kyambura Gorge is more physically challenging and therefore is suitable only for reasonably fit people. But it is a real rainforest experience, and the place is fantastic. In my opinion it is one of the best place for chimpanzee trekking in Uganda.
Something to say about the staff: I had a lady as a guide in Kyambura Gorge. She was very competent, polite and friendly. In fact, it was the only time in Uganda I had a really competent guide who knew the place and at least the animals we were looking for, and most important – who was really telling you something.
Kyambura is the only place in QENP where you can see habituated chimpanzees and o 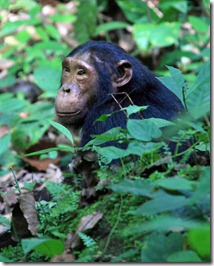 ther types of primates including red-tailed monkey, black-and-white colobus, baboons and vervet monkeys. The park is also known for its variety of avian species including various falcons, the blue-headed bee-eater and the African Finfoot.
The Gorge forms the border between Queen Elizabeth National Park and the Kyambura Wildlife Reserve, a little visited tract of savannah notable less for its wildlife viewing than the waterbirds – in particular flamingo attracted to its lovely crater lakes.
How to get to Kyambura Godge
The Visitors’ center is located at the famous Fig Tree Camp on the rim of the Kyambura Godge, about 2.5 km east of the main road along the turn-off that is clearly sign-posted some 9km south of the bridge. Travellers without private transpoert can ask any bus or shared taxi to drop them at this juction. You are permitted to walk along the 2.5km track to Fig Tree Camp unguided, though some risk of encountering elephants, buffallo or other potentially dangerous animals does exist. Alternatively, charter a taxi from Katunguru, or from the village of Kyambura about 4km further south.
The turn-off to Kyambura Game Reserve runs east from Kyambura Village, 13km south of Katunguru bridge, where it is clearly signposted. The reserve entrance lies 4km past the turn-off, and it is another 9km from there to Flamingo Lake. Although this road isn’t in great condition, you’ll have no problem in a 4WD, and it is traversed by fairly steady trickle of shared taxis terminating at a small fishing village on the souther shore of Lake George
Kyambura, the RIVER OF THE BLIND
Local tradition has it that the Kyambura River had no name until one day, without warning, it flooded, surprising the locals who had lived along its banks or washed their clothing there. As the waters subsided, the locals one-by-one waded upriver to Lake George in search of the possessions that had been washed away in the flood. Invariably, they would return empty handed and announce, ‘Kyambura’ –  a local phrase meaning ‘I cannot see it’. This eventually became the river’s name.

Why You Must Visit Bigodi Wetland, Kibale and Fort…

What to expect from a safari to Kibale National Pa…

Special Tours to See chimpanzees, Gorillas and other Primates

This eco-lodge is perched above the Kyambura Gorge at the edge of Queen Elizabeth National Park in Uganda.
Learn more >>

Located close to as well the chimpanzee tracking in Kyambura Gorge as to the prime game viewing areas in the park, it forms an excellent base for your exploration
Learn more >>

One of the most beautifully situated lodges in Uganda, facing the bank of Kazinga Channel which routinely attracts large herds of buffalo, elephant, and incredible views of the “Mountains of the Moon” – the Rwenzoris.             Learn more >>

in the center of Queen Elizabeth National Park, a fifteen minute drive from the main road, but the scenery is nice. The lodge is on a beautiful lake in the forest. Many monkeys, some hippo-sounds at night.  Learn more >>