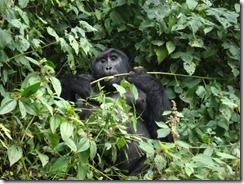 Information from Rwanda Development Board (RDB) indicates that so far, US$128.3m has been raised compared to us$115.6m generated in the same period last year.

Noteworthy, is that the rare Mountain Gorillas contributed more money, since majority of the tourists are interested in the Gorillas that live in the Volcanoes National Park.

The head of the tourism body at RDB, has pointed out that this increase in revenues for the sector, will ultimately trickle down to the communities that live around the Virunga, in addition to financing conservation efforts.

For tourism to continue to grow and flourish especially in regard to the rare mountain gorillas that are characterized as being on the verge of extinction, the role of conservation efforts can not be over emphasised.
And to carry out successful conservation, the local communities around the Virunga Mountains have a fundamental role to play. As has been noted, the local communities must have a stake in the tourism sector and a sense of ownership.

This is only possible when they are direct beneficiaries of the revenues that accrue from the tourist attractions and activity in their area. This will help in avoiding poaching and land use in a manner that destroys the natural habitat of  for example; the mountain gorillas.

By ensuring that the proceeds from the sector trickle down to the community, the managers of the tourism sector are investing in the sustainability of tourism and also guaranteeing social welfare of the communities.