Africa Ebola Outbreak– Is Uganda safe for tourists? Is there Ebola in Uganda

In this article, we try to answer the following Questions: Africa Ebola Outbreak– Is Uganda safe for tourists? Are you safe from Ebola when you travel to Uganda? Will I catch Ebola while in Uganda? How to avoid Ebola in Uganda.

You are definitely safe from Ebola when you tour Uganda. The current Ebola outbreak in DRC doesn’t in anyway affect tourist activity in Uganda. There is a lot of restrictions for those traveling from DRC to Uganda at all entry points. There is a lot of healthy scrutiny at all Uganda border points for Ebola that it is very very hard to have Ebola in Uganda. So it is absolutely safe to travel to Uganda, you won’t catch Ebola.

We understand that there is concern over the Ebola outbreak in DRC Congo and we would like to reassure everyone  that to date there have been no reported cases of Ebola in Uganda, Rwanda.

The World Health Organization (WHO) states: ‘The risk of a tourist or businessman/woman becoming infected with Ebola virus during a visit to the affected areas and developing disease after returning is extremely low, even if the visit included travel to the local areas from which primary cases have been reported. Transmission requires direct contact with blood, secretions, organs or other body fluids of infected living or dead persons or animal, all unlikely exposures for the average traveler’s.’

The WHO is also taking stringent measures in asking countries affected by Ebola to conduct exit screenings of people leaving at international airports, seaports and major land crossings in order to prevent the virus spreading. 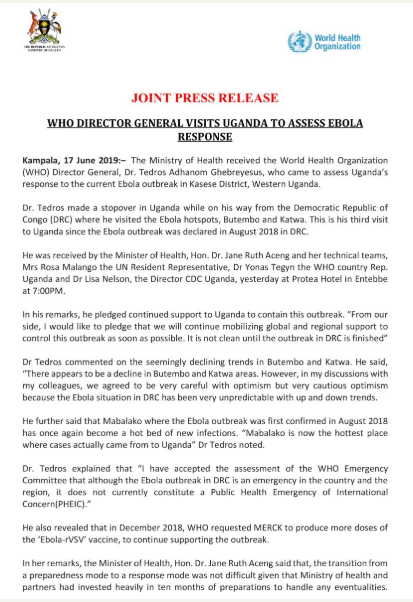 The map above is a cartographer’s representation highlighting the vastness of Africa in comparison to other countries. This will help you to better visualize the distance between the affected Ebola areas and our camps and lodges.

Is Uganda Safe from Ebola, Is there Ebola in Uganda?

As of August 14, 2019, Uganda has not had any Ebola case,  Uganda has not registered any new confirmed Ebola Virus Disease (EVD) case in any part of the country. It is for this reason that the Uganda Ministry of Health and World Health Organisation have declared Uganda free of Ebola and all Uganda  nationals and international travelers are free to travel to and within the country without fear of getting Ebola in Uganda.

Ebola Prevention – how to avoid Ebola

Is Uganda Safe for Tourists? Is it safe to go to Uganda, How safe is Uganda