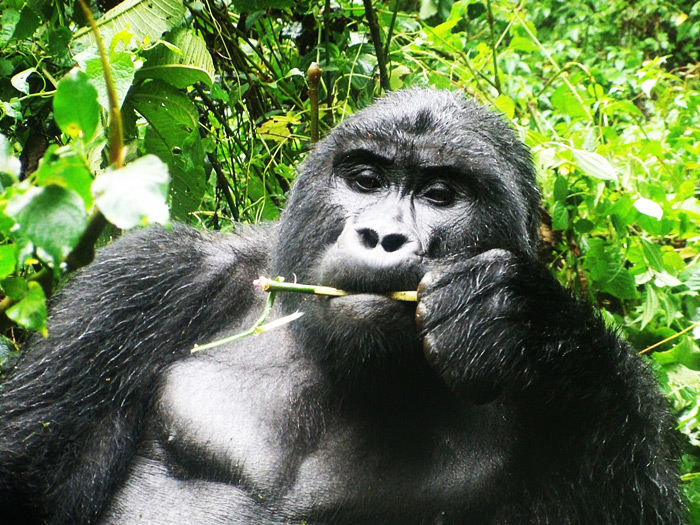 The mother, Jicho, is around 33yr old and was born into the Rugabo gorilla group in the 1980s. The new baby is Jicho’s seventh child and increases Mapuwa group’s total number to 25 individuals.

Ruhabo gorilla group was among the first groups to be habituated in Virunga in 1984.

Mountain gorillas live on the green, volcanic slopes of Rwanda, Uganda, and the Democratic Republic of Congo.

Many conservation initiatives have helped to steadily increase the mountain gorillas population from about 330 mountain gorillas in 1999 to about 1048 currently (2019). Still they continue to face major threats from habitat loss and poaching.

Female gorillas give birth to one infant after a pregnancy of nearly nine months. Unlike their powerful parents, newborns are tiny—weighing four pounds—and able only to cling to their mothers’ fur. These infants ride on their mothers’ backs from the age of four months through the first two or three years of their lives.

Young gorillas, from three to six years old, remind human observers of children. Much of their day is spent in play, climbing trees, chasing one another, and swinging from branches.
Females usually give birth every 4 years. Usually a single infant is born with twins being rare. There is a 40% mortality rate for newborn mountain gorillas which means that an adult female usually only has 1 surviving offspring produced every 6 to 8 years. Therefore many females will only have 2 to 6 offspring in a lifetime.

In captivity, gorillas have displayed significant intelligence and have even learned simple human sign language.

Do you wish to trek the mountain gorillas in the Democratic Republic of Congo?  Here are some Virunga Gorilla Trekking Tours and Adventures for you: