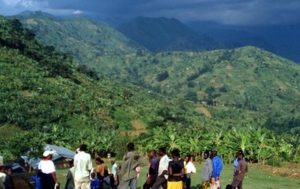 The assistant warden at the national park, Mr Stephen Nyadru, while speaking at the launch on Friday, said the move is aimed at attracting more tourists. He said activities will include traversing of rocks, washouts, and steep declines, on dirt trails, logging roads, and gravel roads that wind along lazy streams through forested valleys or trails that climb up steep mountainsides; and other unpaved environments.

“This is the first time we are introducing this form of tourism (cycling in Mt Elgon). We feel that after climbing the mountain, usually tourists remain dull during descending so this will be able to give them another exercise down the hills as a modern form of tourism in Uganda,” said Mr Nyadru.

He said the specific advantages of mountain bike-riding combines pleasure of being in the mountains with the health advantages of altitude and gradients, significant level of physical exercise and the possibility to cover longer distances.

Others are the talking tree along in Kapkwai, and the caldera and crater lakes/pools. The Mt. Elgon area conservation manager, Mr Adonia Bintorwa, said on the first day of launching, the park earned Shs12 million from Ireland bikers – Concern Worldwide – who were on a tri-adventure of Mt Elgon.

The 1145km² Mt. Elgon National Park lies on an extinct volcano, one of uganda’s oldest physical features, first erupting around 20 million years ago. Mt. Elgon is capped by one of the world’s largest intact calderas, 40km² in size. This was created after an unusually violent eruption emptied the volcano’s magma reservoir. The cone, no longer supported by underlying molten rock, collapsed inwards, permanently blocking the main vent.

Mt. Elgon was once Africa’s highest mountain, far exceeding Kilimanjaro’s current 5895m. Millenia of erosion have reduced its hieghts to 4321m, relegating it to the 4th hieghest peak in East Africa and 7th on the continent.